Apparently this weekend they’ve been cooking Werner Herzog’s shoe again. Or rather a beautiful pair of pigskin shoes. Alice Waters literally cooked the original when Errol Morris finished his film, Mr Herzog having said he would eat his shoe if he did. Morris held him to his word.

Incidentally Chez Panisse was named after a character in Marius, Fanny and César, the trilogy of films by French filmmaker Marcel Pagnol, set in a bar in the Old Port of my favourite bolt hole, Marseille.  As part of a Pagnol retrospective, they’re showing his The Baker’s Wife today.

I did not want to cook shoes for a Chez Panisse tribute menu main course, but a version of the dish served on the evening of August 28, 1971, exactly 40 years ago today: Canard aux olives, a bistro classic. (Former Chez Panisse pastry chef David Lebovitz has published some photos of the Chez Panisse menus over the years.)

Apparently Chef Victoria Kroyer spent three days on the sauce, making a fond brun which became sauce espagnole which became a demi glace (and no that’s not ice cream) yielding a superb sauce to be mixed with the olives, served over braised ducks. She had never made any of them before. (Me neither.)

As I was never going to spend three days making a sauce for this dish, I started looking around for a recipe for Canard aux Olives. Some were cooked on a stovetop, some in the oven. Some used stock, some didn’t. Some used fresh tomatoes or paste. Mine doesn’t.

To go with the duck, I love sautéed potatoes, and it’s great to sauté them in the duck fat you’ll pour off. That’s typical bistro style, just duck and potatoes, no veg, but serve some steamed broccoli or something if you’d like some. 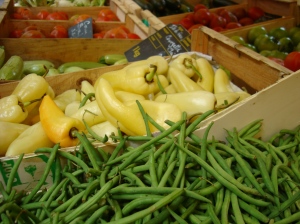 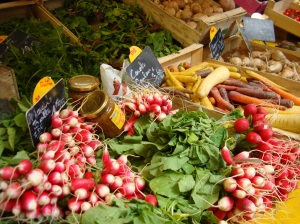 To follow I served a mesclun salad for Alice, who loves to prepare a salad of young fresh salad leaves. (Note: Only add the dressing at the last minute, else the leaves will “cook”.)

It feels almost strange to think that I’m serving this meal to my French family, 40 years to the day Chez Panisse served it. And around a French heirloom table – one that leaves barely enough room to get your knees under, and that is so high you have to almost lift your cutlery up as if you’re conducting an orchestra.
I think Alice Waters would approve. 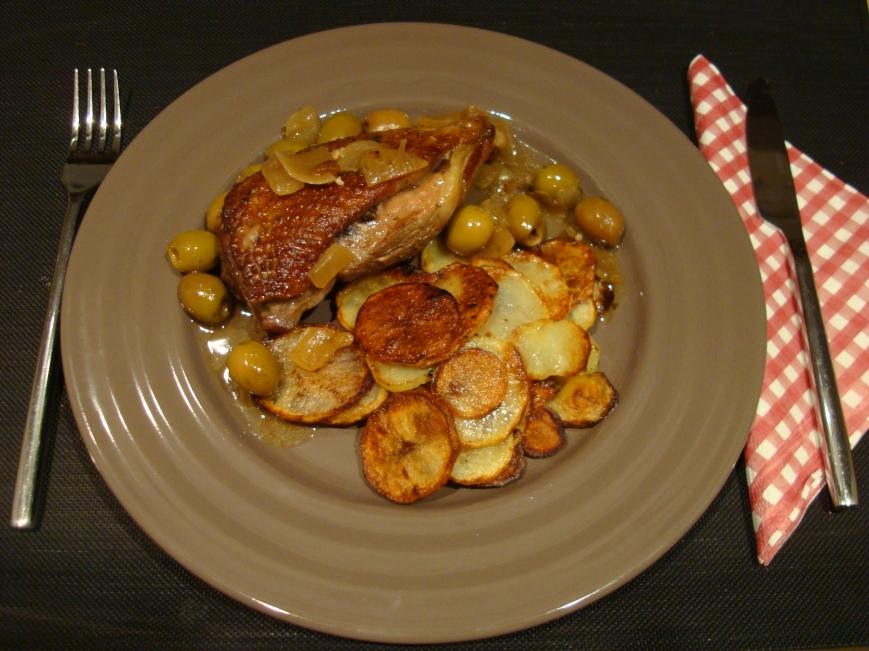 (adapted from a recipe by L’Atelier des Chefs, Paris)

Plus About 1.5 kg potatoes (Charlotte are good), sliced and parboiled, if you wish to serve sautéed potatoes with the duck.

1. Sear the duck breasts (skin side down), or pieces (all over) in a large casserole, about 10 minutes each side. Beware because they will spit and splutter and release a lot of fat, which will be hot.
2. Remove.
3. Pour out the fat into a frying pan to sauté the potatoes if serving.
4. Add a bit of olive oil and brown the onions.
5. Add the crushed garlic.
6. Add the olives and the duck.
7. Pour in the dry white wine.
8. Add the bouquet garni.
9. Sprinkle in a tablespoon of flour.
10. Cover and cook for 30 minutes.
11. Sauté the parboiled sliced potatoes in the duck fat.
12. Remove the bouquet garni and serve the duck breast with the olives and sauce poured over with the potatoes on the side.