When David Lebovitz has a book signing, I’m lucky enough to be able to hop on a metro or Velib’ and go along and say hi. But I’ve now got all his books. And he’s signed them all. So should I really bother him this time? My heart flutters too much and I turn into an idiot in his presence however hard I try not to. He’s only (an inspirational) human.

This time he gave me a good enough reason though.

Ice cream. Or rather the Haute Couture of Paris ice cream he’d invited along.

Food trucks are still trending in Paris. And Henri Guittet at Glaces Glazed completely shakes up the idea of the classic British ice cream van.

But, there was no food truck in sight when I got to the venue. Henri had parked up on a table inside La Cuisine cooking school, which overlooks the Seine and is just behind Paris City Hall. Just as well as the temperature was half what it’d been the previous day and the sky had turned back to umbrella weather.

But that wasn’t going to stop me trying a little “Cococaine”, what Henri has called his coconut and Hyaganatsu sorbet. Hyaganatsu? Another Japanese citrus fruit somewhere in between a pomelo grapefruit and yuzu.
And a scoop of “Smoke on the Water”, really vanillery vanilla with hemp seed (a kind of nutty flavour that is now on the next bring back from England list).

And while delecting those I chatted with Henri (I did pop up to say hello to David and gibber a bit while he was packing up). I’d assumed that the name Glazed came from the French glacé which means iced but also glazed, or glace which if you speak a little French you might know is ice cream. But it turns out the play on words goes even further than that and back to fashion, as glacé is also the paper in glossy magazines.

And okay a scoop of “Pussy Griottes”, a cherry sorbet with blackcurrant pepper (no mistake), which is actually ground blackcurrant buds and has an almost umami taste, not at all sweet but not sour, nor tangy, the flavour of which has serious texture.

And stop. Although as someone always on the hunt for new and unusual flavours and combinations, I can see myself getting addicted. The ice cream or sorbet is not too sweet, but incredibly seductive. Henri speaks my language (and good English).

A little Black Sugar Sex Magic (dark chocolate sorbet with wasabi and ginger) was tempting but would have been taking things a little too far for me on a Sunday afternoon though.

If you like exclusive clubs you can sign up to be one of the privileged few to get one of the 250 keys released each quarter to have the right to 1/2 or a litre of ice cream/sorbet a month delivered to you and get to vote on new flavours amongst other privileges.

Glaces Glazed would not be out of place in a hot Paris jet set soirée “arrosée”, but rather than extinguish the heat, I reckon Henri’s ice creams would make it sizzle even more.

If you want to have it work its magic on you, you can find the Glaces Glazed truck behind the Publicis drugstore on the Champs Elysées this summer, or have a look at the website or Facebook page for outlets. 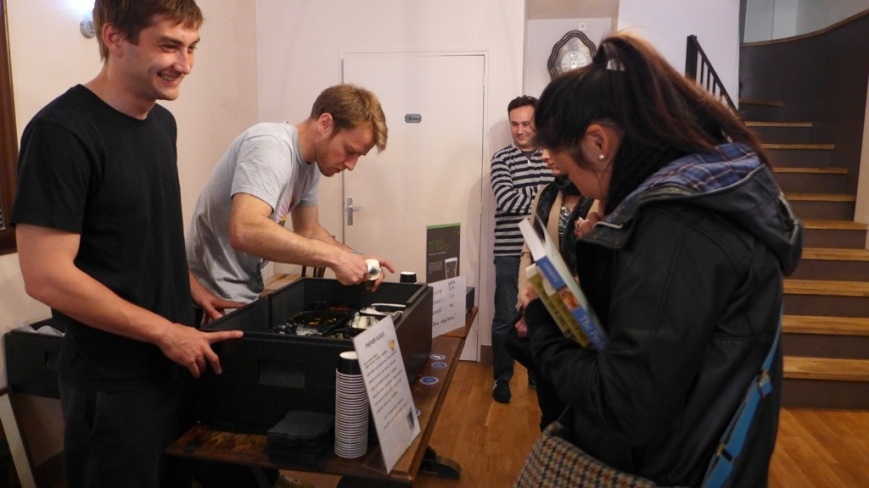